Should You Buy or Build a Gaming PC?

A battle that has raged for decades. “Should I build a PC“ vs “should I buy a pre-built PC”, I hear you debating to yourself.

Trust me, we’ve all been there, and you’ll hear strong arguments on both sides of the fence; everyone has an opinion on this.

It may seem like a difficult decision to commit to when there are very contrasting views available. What’s more, if you’ve read/heard someone say there is a definitive answer to this question, they’re lying.

We can easily find the answer that is right for your circumstances.

Today, we’re going to breakdown the build vs buy questions and get the answer right for you.

Let’s start with the obvious one:

Is it cheaper to build or buy a gaming PC?

“How much cheaper is it?” I hear you ask: typically in the range of a 10-20%, sometimes more. Due to the lack of manufacturer assembling the PC parts, there is no “middle-man” trying to profit from the build service.

The cost savings become more impactful as you reach higher price points, in fact, if your budget is very limited (say a couple of hundred dollars) a pre-built will very likely work out similar in price. Here’s a graph to represent, because who doesn’t love a graph! 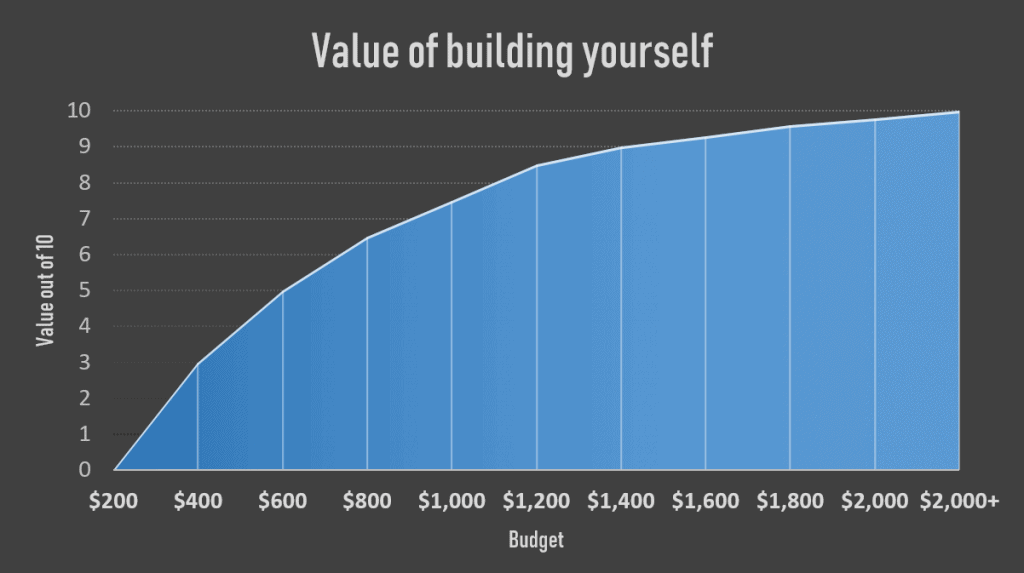 It’s worth noting that this isn’t always the case. Companies can also get great wholesale discounts on PC components that drive their pre-build units down, you may also run into individual parts costing you more than they usually would during exceptional periods of certain low supply or high demand.

There are a bunch of articles titled “why buying a pre-built PC is cheaper than building one yourself”.

You should know nearly these of all originated in 2018 when GPU prices spiked dramatically due to cryptocurrency mining and that this information is outdated.

PC hardware manufacturers right now are healthily competitive and prices for components (particularly CPUs and GPUs, the two largest expenses) are looking a lot better than a couple of years ago.

By all means, compare the build you’re looking at if you want to be sure on which is better (if a pre-built option is available), but as a rule of thumb: self-built > pre-built for your wallet. If your principle concern is cost/maximizing a certain budget for the best performance, get building!

Sure, you can probably save money by building a PC.

But what about the time spent?

It will likely take you 5-10 hours to put your first build together, you need to:

If you value your time per hour at a certain monetary level, there will be a point where buying a pre-build becomes more “valuable” than a self-built PC.

Many who enjoy the build process would argue that this time isn’t work so it’s a false equivalency, but what do you think?

If this is a busy time in your life and you were looking for a gaming PC to use the few spare hours you do have for high-quality entertainment, then you should look at a pre-built.

After all, the cost you pay on top is for convenience. Similar to heading to your local coffee shop for that quick latte (where are the “self-built vs pre-built coffee” articles!?)

Perhaps the thought of doing the above task list is stressing you out (or not exciting you in the slightest). If that’s the case, look at a pre-built.

Your budget vs your expectations

Last point on the money topic, what are you looking to get out of your build for your budget?

Do you want the PC to run Red Dead Redemption 2 and Far Cry 5 at an acceptable framerate/resolution?

Or are you looking for a computer that could manage Fortnite, League of Legends, Fallout 4, and other slightly older, less graphic-intensive games?

If the latter, you’ll have the flexibility to buy a pre-built if you prefer.

If the former, you need to squeeze your cash to its maximum potential and will likely need to build yourself.

Now that we have the money question out of the way, let’s look at some others: 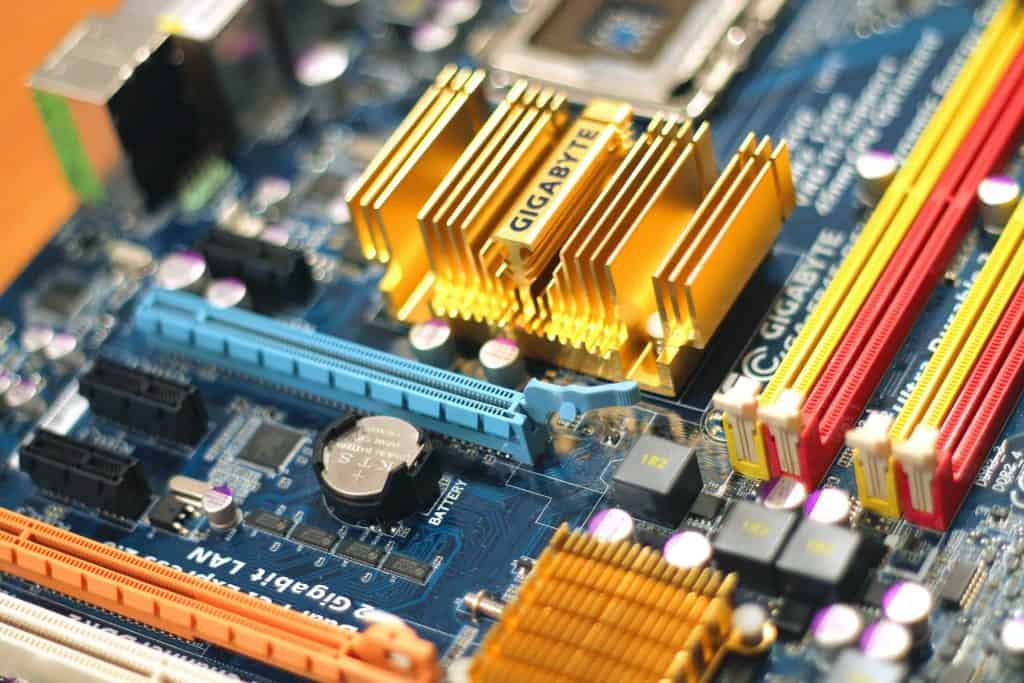 Why you should build your own PC

The joy of the build

You’ve just finished putting all of your parts together after hours of assembly, you press the power button…

… and you hear the whir of the fans and the lights of the case come to life – Feels like magic!

Aside from the cost, this is what really motivates people to build – there is a certain rush to knowing you put the machine together yourself and for many (myself included) this alone is worth the additional time investment.

It may not be hard to pick up, but building a PC is not something everyone knows how to do, and it’s very freeing knowing for yourself first hand that it’s not that hard.

Not only does building a PC now set you up for being able to do other builds further down the line, but once you know how everything fits together (how your RAM connects to your motherboard, how to screw your SSD into the case, etc.), you’ll be in a great position to upgrade parts in the future.

If you’re serious about gaming you’ll likely want to upgrade in 1-3 years time (e.g. GPU) so this will come in handy sooner than you think.

Not to mention the bragging rights of having a PC that you’ve built yourself. Just be careful not to be too proud of your accomplishment or you’ll end up being tech support for all of your friends and family!

When you think of your dream PC, do you have something very specific in mind?

Perhaps you want the pink darkFlash Micro ATX case combined with an RGB motherboard and a red XFX GPU.

Well, you might have a problem if you wanted to buy that pre-built (other than your brave design choices).

Pre-built PCs will usually have a limited amount of configurations available.

This isn’t just aesthetic, you’d be limited in what parts you want to pick in terms of specification too.

What about Operating System? Perhaps you want Linux or something less standard?

OS will nearly always be Windows for pre-builts (and may also come with undesired additional software (i.e. bloatware) that will slow your PC down).

There are some companies out there that will effectively build anything for you if you provide them the shopping list, but these services are going to come with a much higher premium.

In addition, if you’re the sort of person who likes to customize often, it’s worth bearing in mind that the warranty of a pre-built PC will likely be void if you tamper with anything (though I expect a majority of you would not upgrade your PC over the warranty period anyway).

If your heart is set on a unique configuration, I push you towards building yourself. 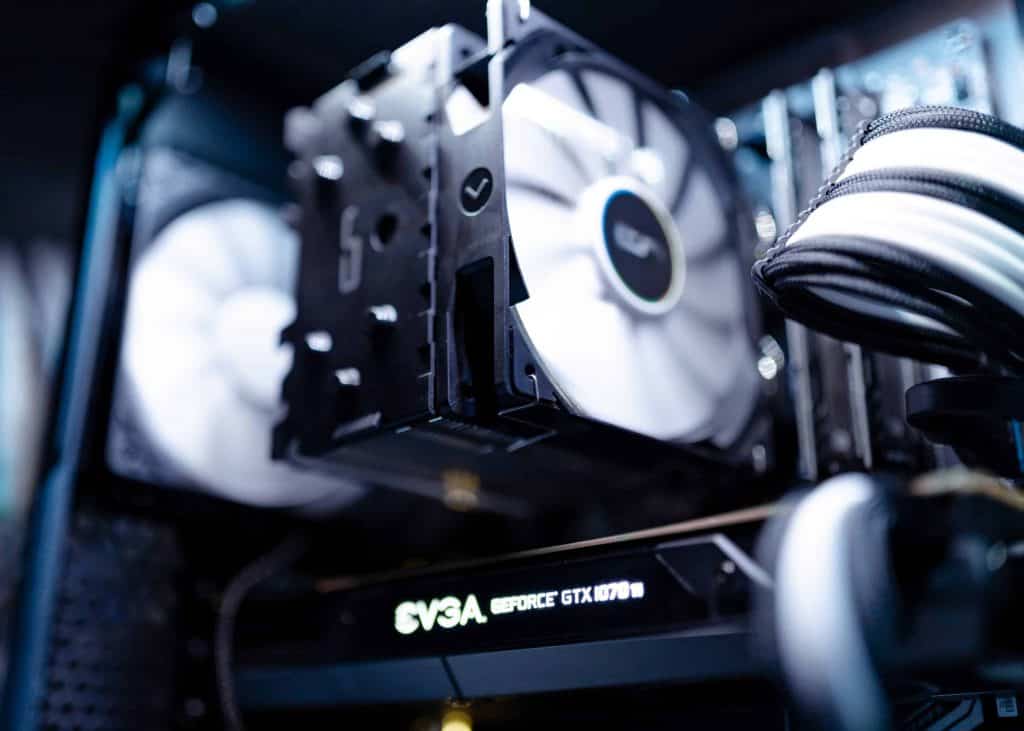 Why you should buy a pre-built PC

The pain of the build

You’ve just finished putting all of your parts together after hours of assembly, you press the power button and…